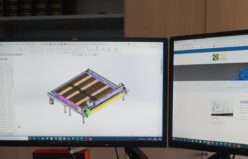 In fact, it was July 17, 2000 when the entrepreneurial adventure of Angelo and Massimo Paraboschi began.

Angelo, the father, came from extensive professional experience. He began as a lathe operator in 1967, then became a designer, and finally established himself as a mechanical designer responsible for assembly department relations, first at SECMU then MCM (two important industrial companies that made history in the Piacentino district).

Challenging projects and an eagerness to further express his skilled passion for industrial design led Angelo Paraboschi to take the risk in 2000.

Angelo could count on the total and unconditional support of his family since the beginning. In particular, his son Massimo joined the company as a designer on the first day. He got his technical high school diploma in Mechanical Engineering and entered the world of work for a few years through MCM, where he was a designer.

“In the beginning, we had an office of barely 40 square meters – recalls Massimo – and we had only one desk because the furniture dealer was late in delivering the second. Dad started his new life as an entrepreneur by placing his tools on a pile of makeshift plywood for a few days”.

The father, Angelo, is now retired. However, Pieffe Disegni has achieved its actual relevance with seven staff members—four mechanical designers, one architect, and one mechanical draftsman—also following his example and dedication.

Among them is the engineer, Marco Saltarelli. He has worked as an employee since 2014, accepting Massimo Paraboschi’s proposal to become a partner and bring further energy and momentum to the studio’s activity.

Today, Pieffe Disegni is a solid reality. It has been able to face and overcome even complex crossroads, such as the 2-year period of 2009–2010 when the economic crisis decimated numerous companies in the Piacenza mechatronics district of excellence.

Step by step, it has grown, daring to question itself and even deal with design challenges that it had never experienced, like managing a project from inception to implementation.

“Quite often, our corporate clients have specific production needs, and this is why they can’t find the machine or application to fit it perfectly – explains Massimo Paraboschi.

We’ve developed a working method for these requests. After a preliminary meeting, we realize an early project. This phase always involves the client and often the operators who use the machine every day. The purpose is understanding the concrete needs, overcoming any issues that look critical, and thus being able to better respond to specific needs”.

The design also makes use of calculation tools, 3D simulations, and the most cutting-edge technical drawing software, such as the updated versions of SolidWors, AutoCAD Inventor, and Catia V5. This allows for interfacing with the clients’ technical departments right away, skipping the preliminary effort of making different language systems dialogue.

Our availability of mechanical design orders of different sizes has introduced us to the needs of the most diverse sectors. These span, for example, from a medium or small company looking for a machine that can carry out series production yet provide a certain degree of customization to the large companies that are working on the construction of the new European space carrier, Ariane 6.

Pieffe Disegni has faced and won a lot of design challenges. These include the food industry; the pharmaceutical sector; the railway industry; luxury shipbuilding; Oil & Gas extraction, and solutions for precision water jet cutting. We have described these experiences in detail through a special report.

The formula that has led to these results passes through a mix of very different elements. A constant dialogue with the academic world—especially the Polytechnic University of Milan—in developing highly complex projects holds a prominent place among these.

“Transferring our headquarters to Piacenza has represented an important development. In fact, it makes us even closer to both the national and international market: the results of this choice are already tangible and are certainly positive – explains Massimo Paraboschi.

I feel great satisfaction when looking back at this 20-year story as I witness the commitment and sacrifices that creating original projects tailored to the specific needs of our client companies has often required”.

In recalling the early days, Massimo Paraboschi still uses that famous desk that never arrived for the business’ first day, yet the furniture dealer had no way of delivering on time. This has become a kind of lucky charm for the company, as well as a witness to and symbol of the achievements by dedication, will, and passion.

“We’re celebrating this anniversary,” concludes Massimo Paraboschi, “which is a great result for a small company. We desire to keep growing so that we can better assist the companies that turn to us for their projects”.

We wish to thank everyone who helped write such a beautiful and important story.